The extent and the severity of cognitive neurologic dysfunction can be measured with the aid of neuropsychological testing. Neuropsychologists use their tests to localize and identify dysfunction to specific areas of the brain. For example, the frontal lobes play an essential role in drive, mood, personality, judgment, interpersonal behavior, attention, foresight and inhibition of inappropriate behavior. The ability to plan properly and execute those plans is known as “executive function.”

Frontal lobe injury is often associated with damage to the olfactory bulbs beneath the frontal lobes. Survivors may note a reduced, or altered sense of smell. One recent study (Varney 1993), showed that 92% of survivors of brain injury suffering anosmia (loss of smell) had ongoing problems with employment, even though their neuropsychological testing was relatively normal.

The effects of brain injury on the survivor may be equaled, or even surpassed, by the effect on the family. Brain injuries are known for causing extreme stress in family and interpersonal relationships. In general, the symptoms should lessen over time as the brain heals, but may worsen because of the survivor’s inability to accept help, or adapt to the brain injury. For this, and other reasons, it is not uncommon for psychological problems to surface, and worsen after brain injury. 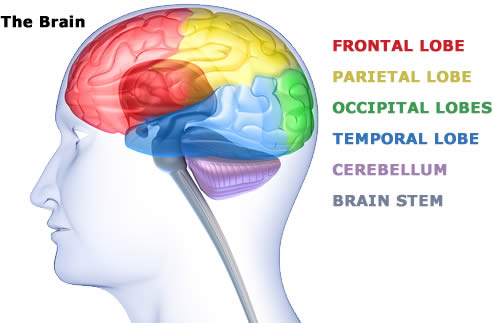 Symptoms vary widely after “brain injury”, and the nature of them depends, in large part, on where the brain is injured. Below is a list of possible physical and cognitive symptoms which may arise from damage to specific areas of the brain:

PARIETAL LOBE: near the back and top of the head

OCCIPITAL LOBES: most posterior, at the back of the head

TEMPORAL LOBES: side of head above ears

BRAIN STEM: deep within the brain

CEREBELLUM: base of the skull