The Structure And Function Of The Human Brain 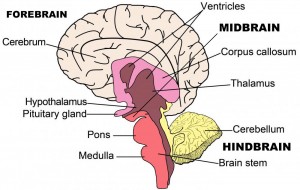 The brain structure is composed of three main parts: the forebrain, midbrain and hindbrain, each with multiple parts.

The Cerebrum: Also known as the cerebral cortex, the cerebrum is the largest part of the human brain, and it is associated with higher brain function such as thought and action. Nerve cells make up the gray surface, which is a little thicker than our thumb. White nerve fibers beneath the surface carry signals between nerve cells in other parts of the brain and body. Its wrinkled surface increases the surface area, and is a six-layered structure found in mammals, called the neocortex. It is divided into four sections, called “lobes”. They are; the frontal lobe, the parietal lobe, the occipital lobe and the temporal lobe. 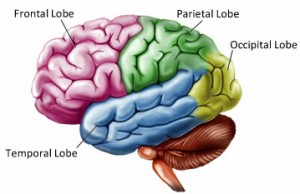 Functions Of The Lobes:

Parietal Lobe – The parietal lobe is located at the upper rear of our brain, and controls our complex behaviors, including senses such as vision, touch, body awareness and spatial orientation. It plays important roles in integrating sensory information from various parts of our body, knowledge of numbers and their relations, and in the manipulation of objects. Portions are involved with our visuospatial processing, language comprehension, the ability to construct, body positioning and movement, neglect/inattention, left-right differentiation and self-awareness/insight.

Occipital Lobe – The occipital lobe is located at the back of our brain, and is associated with our visual processing, such as visual recognition, visual attention, spatial analysis (moving in a 3-D world) and visual perception of body language; such as postures, expressions and gestures.

Temporal Lobe – The temporal lobe is located near our ears, and is associated with processing our perception and recognition of auditory stimuli (including our ability to focus on one sound among many, like listening to one voice among many at a party), comprehending spoken language, verbal memory, visual memory and language production (including fluency and word-finding), general knowledge and autobiographical memories. 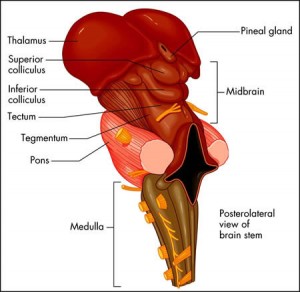 The midbrain is located below the cerebral cortex, and above the hindbrain placing it near the center of the brain. It is comprised of the tectum, tegmentum, cerebral aqueduct, cerebral peduncles and several nuclei and fasciculi. The primary role of the midbrain is to act as a sort of relay station for our visual and auditory systems. Portions of the midbrain called the red nucleus and the substantia nigra are involved in the control of body movement, and contain a large number of dopamine-producing neurons. The degeneration of neurons in the substantia nigra is associated with Parkinson’s disease. The midbrain is the smallest region of the brain, and is located most centrally within the cranial cavity.

Limbic System – the limbic system is often referred to as our “emotional brain”, or ‘childish brain’. It is found buried within the cerebrum and contains the thalamus, hypothalamus, amygdala and hippocampus.

Hypothalamus – the primary role of the hypothalamus is to regulate various functions of the pituitary gland and endocrine activity, as well as somatic functions e.g.body temperature, sleep, appetite.

Amygdala – the primary role of the amygdala is to be a critical processor for the senses. Connected to the hippocampus, it plays a role in emotionally laden memories and contains a huge number of opiate receptor sites that are implicated in rage, fear and sexual feelings.

Hippocampus – the primary role of the hippocampus is memory forming, organizing and storing information. It is particularly important in forming new memories, and connecting emotions and senses, such as smell and sound, to memories.

Pituitary Gland – the primary role of the pituitary gland is an important link between the nervous system and the endocrine system. It releases many hormones which affect growth, metabolism, sexual development and the reproduction system. It is connected to the hypothalamus and is about the size of a pea. It is located in the center of the skull, just behind the bridge of the nose. 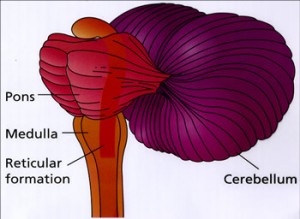 The Cerebellum – The cerebellum, or “little brain”, is similar to the cerebrum with its two hemispheres and highly folded surface. It is associated with regulation and coordination of movement, posture, balance and cardiac, respiratory and vasomotor centers.

Brain Stem – The brain stem is located beneath the limbic system. It is responsible for vital life functions such as breathing, heartbeat, and blood pressure. The brain stem is made of the midbrain, pons, and medulla.

Pons – The primary role of the pons is to serve as a bridge between various parts of the nervous system, including the cerebellum and cerebrum. Many important nerves that originate in the pons, such as the trigeminal nerve, responsible for feeling in the face, as well as controlling the muscles that are responsible for biting, chewing, and swallowing. It also contains the abducens nerve, which allows us to look from side to side and the vestibularcochlear nerve, which allows to hear. As part of the brainstem, a section of the lower pons stimulates and controls the intensity of breathing, while a section of the upper pons decreases the depth and frequency of breaths. The pons is also associated with the control of sleep cycles, and controls respiration and reflexes. It is located above the medulla, below the midbrain, and just in front of the cerebellum.

Medulla – The primary role of the medulla is regulating our involuntary life sustaining functions such as breathing, swallowing and heart rate. As part of the brain stem, it also helps transfer neural messages to and from the brain and spinal cord. It is located at the junction of the spinal cord and brain.