Road safety is everyone’s responsibility, and a necessary part of our increasingly mobile lifestyles. 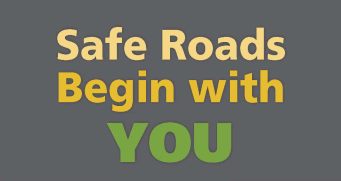 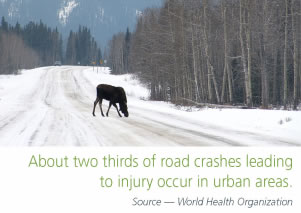 The Truth About Distracted Behaviors

You may be surprised to learn that while driving or walking, cell phones are just a small part of the distracted behavior problem. Actually, everything that occupies your mind or your vision can contribute to distraction behind the wheel.

If you must use a distracting device while walking or jogging, such as a music player, keep the volume turned down so you can hear warning, sirens, approaching vehicles, etc. If you need to use your phone, simply stop and rest for few moments while you do, then resume when finished.

The two most common types of distractions are Cognitive and Visual:

Your brain is only capable of processing a certain amount of information at any given time. When we attempt to perform multiple tasks at the same time, such as driving or walking while talking on the phone or eating, we become cognitively impaired.

Multiple tasks compete for our brain’s attention, but humans are not naturally multi-taskers, we are serial taskers. In fact, recent research indicates that our IQ can drop as much as 40%, with a similar decrease in productivity, while attempting to juggle tasks. And, studies have revealed that drivers practicing distracted behaviours look at, but fail to see, up to 50 percent of the total information in their driving environment. 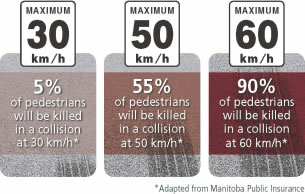 We all know we have to look where we are going. Yet, we see people driving without looking, or ignoring, where they are going every day. Driving while visually distracted is frequently compared to driving with your eyes closed.

Distracted drivers are, in effect, visually impaired. A quick glance down to a phone screen at 88 kph can cause you travel the length of a football field as if you had your eyes closed. Texting takes your attention away for an average of 4.6 seconds, during which you are 23 times more likely to be involved in a crash.

Other common distractions include eating, adjusting music, GPS device use, applying makeup, reading, and reaching for moving objects. Each of these tasks dramatically increases your odds of getting into an accident.

So, please turn off your phone before getting behind the wheel, turn down headphones while walking and jogging, and if a call comes in while you’re on the street, stop, relax, and have a seat. Wherever you are, and whatever you are doing, please give your activity 100% of your attention. Your life, and the lives others, depends on it.

View the results of the NBIA’s 2014 Road Safety Survey. (pdf)

View the results of the NBIA’s 2013 Road Safety Survey. (pdf)

Multitasking Is Hazardous To Your Health
www.travelers.com/prepare-prevent/iw-images/auto/Infographics/Distracted_Driving_Desktop.pdf

According to the Canadian Automobile Association, cell phones are one of the most common distractions for drivers

Drivers engaged in text messaging on a cellular phone are 23 times more likely to be involved in a crash, or near crash event, compared with non-distracted drivers. (Virginia Tech Transportation Institute, 2010)

84% of distracted-driving-related fatalities in the US were tied to the general classification of carelessness or inattentiveness (National Highway Traffic Safety Administration, 2009)

80% of collisions and 65% of near crashes have some form of driver inattention as contributing factors (National Highway Traffic Safety Administration, 2010)

Distracted drivers are 3 times more likely to be in a crash than attentive drivers (Alberta Transportation, 2011)

In 2010, distracted driving was a contributing factor in 104 collision fatalities in British Columbia (RCMP)

International research shows that 20% to 30% of all collisions involve driver distraction (Alberta Transportation, 2011)

Every year, on average, 31 people die in Lower Mainland distracted driving related crashes, and 91 people are killed in B.C.

Distracted driving is the second leading cause of fatal car crashes in B.C., trailing behind speed and just ahead of impaired driving.

A 2012 Ipsos Reid survey, conducted on behalf of ICBC, showed that B.C. drivers consider texting while driving to be just as risky as drinking and driving, yet 40 per cent of those who own cell phones admit they’ve used their hand-held phone while driving.

The B.C. government banned the use of personal electronic devices (including talking on a hand-held cellphone and text messaging) while driving as of January 1, 2010, but despite experts across north America stating that even hands free use of cell phones is distracted driving, it is still legal in BC. Hands-free in BC means a Bluetooth, or wired headset or speakerphone. The device must be securely attached to the car, and not in your lap, or loose on the seat beside you.

BC Motor Vehicle Act, Part 3.1 — Use of Electronic Devices While Driving

Whether it’s a quick call to ask what’s needed from the grocery store or catching up with a long-distance friend – people everywhere talk on cell phones while they’re driving.
It’s long been recognized that talking on the phone while driving increases your risk of being involved in a crash. But in recent years, car and technology companies have marketed hands-free devices as a safer way to talk while driving.

Now a growing body of evidence suggests using hands-free phone devices such as ear pieces and Bluetooth is equally as dangerous as talking on a cell phone normally.

The latest study, commissioned by the American Automobile Association and performed by researchers are the University of Utah, measured the cognitive distraction created by performing a wide variety of tasks while driving. Listening to the radio or a book on tape proved to be the least distracting activities, while performing a verbal cognitive task involving math and word recall proved to be the post distracting. Talking on a hands-free celluar device ranked in the middle of the spectrum – more distracting than talking to a passenger and slightly less distracting than holding a phone up to your ear.

There’s more evidence as well. A systematic review published in 2009 found talking on the phone – hands free or not – has a negative influence upon driving performance. And it found that people talking on hands-free devices drive at faster speeds than those using hand-held devices, possibly because the hands-free device provides a false sense of security, resulting in a greater incidence of car accidents.

In addition, a 2012 white paper by the National Safety Council – which includes references from more than 30 research studies – found that “the cognitive distraction from paying attention to conversation – from listening and responding to a disembodied voice – contributes to numerous driving impairments” including inattention blindness (when drivers look at, but do not “see” objects in their path), slower reaction times and problems staying in a lane. That paper concludes: “Driving while talking on cell phones – handheld and hands-free – increases risk of injury and property damage crashes fourfold.”

Taken together, the evidence is clear: Talking on the phone while driving – even when using a hand-free device – is not safe. So they next time you’re tempted to make that quick call or pick up the phone while you’re on the road, take a moment to think about what the research shows.